Farmington, N.M. – An Aztec woman is in custody today following a short vehicle pursuit with Farmington police last night. The pursuit happened around 10:00 p.m. after an officer saw a vehicle driving erratically in the eastbound lanes near Farmington Ave. and E. Main St. The officer signaled the driver to pull over. The driver began to pull into a parking lot and then fled from the officer. The officer followed, and the driver became more reckless, eventually slowing down, jumping out, and running away from the car on foot. The officer ran after the driver and detained her without further incident.

Another officer arriving on scene found the vehicle in drive, still moving and noticed a small child inside the car. The officer immediately jumped into the car and stopped it. The driver, 29-year-old Lashelle Denney, was arrested on an outstanding warrant and new charges of Abuse of Child, Aggravated Fleeing, Resisting, Evading, or Obstructing an Officer, as well as traffic violations. 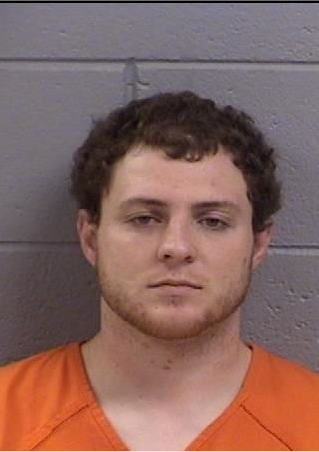 Farmington, N.M. – Farmington police have a man in custody after a brief SWAT standoff yesterday. Officers were dispatched around 1:50 p.m. to a residence in the 800 block of East 24th Street regarding a man wanted on felony warrants. Officers arrived and could hear a man and woman fighting inside the home. The woman came out to talk to officers and confirmed that the wanted man, 28-year-old Joseph Rino, was still inside the house. Patrol officers secured the area and called for the SWAT team to respond. Negotiators’ attempts to contact Rino weren’t successful. Officers obtained a search warrant for the house,  then The SWAT team and K9s entered the house and arrested Rino without incident. Rino was served on the warrants for Aggravated Battery Against a Household Member, False Imprisonment, and Battery Against a Household Member. He was also charged with Resisting, Evading, or Obstructing an officer.

Farmington, N.M. – The Farmington Police Department is looking for the owners of stolen property recovered during a recent auto burglary investigation. Officers responded on January 2 to the area of Foothills and Crestwood after someone saw a man entering unlocked vehicles. They conducted an investigation that ultimately led to the arrest of 28-year-old Kory Galbraith of Farmington. Detectives obtained a search warrant for Galbraith’s vehicle, impounded at the scene, and recovered items reported stolen from vehicles in east Farmington neighborhoods. They found additional items in the vehicle that were not linked to any reported burglaries on record with FPD.

Detectives are encouraging anyone who has been a victim of auto burglary between December 1, 2019 and January 2, 2020 and did not report the crime, to please contact Detective Hardy at 505-258-5144.

Galbraith was arrested on January 2, 2020 and charged with Auto Burglary, Attempted Auto Burglary, Possession of a Controlled Substance, and Resisting, Evading, or Obstructing an Officer.

Farmington police have a juvenile in custody today after an investigation into the death of another Farmington teen. 15 year old Xavion Montano was arrested yesterday and charged with a 4th degree felony for Involuntary Manslaughter and Negligent Use of a Firearm following the investigation into another juvenile’s death on December 14, 2019.

Shortly before 1 p.m. on the 14th, Farmington Police Department responded to a residence on the east side of Farmington with medics to a report of a male juvenile who was unresponsive. Upon arrival, the teen was found to be deceased. Farmington detectives began investigating the scene and found that the juvenile had sustained a gunshot wound, causing his death. Further investigation of the incident ultimately led to Montano’s arrest.

This incident remains under investigation. Information will be released as it becomes available.

Farmington, N.M. – Today the Farmington Police Department released video from the officer-involved shooting that took place on October 10 at an address on Rio Vista Ct. Police Chief Steve Hebbe released the following statement about the incident, “This was an active and dynamic situation to which our officers responded. We recognize the impact an incident like this has on the community, the friends and family of all the involved parties, on the officers and their families, and the department. Although the Sheriff’s Office investigation remains active, based on the facts we know now, the officer’s actions were necessary to protect his life and the life of others.”

On October 10 at approximately 6:12 p.m., dispatch received a call about a man, later identified as 58-year old Norbert Beyet, threatening people with a gun at a residence on Rio Vista Court. FPD officers responded and met at a location near the address to make a plan for a controlled response to attempt to de-escalate the situation. Officers requested medics to stand by and a phone number to try to call and negotiate with Beyet. As FPD officers were trying to call, the Sheriff’s Office helicopter, Air One, flew over the address and witnessed a man and woman in a physical altercation in the backyard with a gun. Recognizing that the situation had escalated, FPD officers approached the house immediately and made contact with Beyet, a woman and two other individuals in the backyard of the home. They began giving clear instructions to the four people. Beyet was armed with a handgun and was not complying with officers’ instructions. The officers approached Beyet, and he pointed the gun towards them. Farmington Officer Jasper Domenici fired a single shot, and Beyet fell to the ground.

Officer Jasper Domenici joined FPD in December 2014 as a lateral from Dona Ana County. He is an eight-year law enforcement veteran.

No further information will be released on this incident until the San Juan County Sheriff’s Office has completed their investigation and the District Attorney’s Office has finalized their review.

A female came into the lobby of the Farmington Police Department today around 11:10 a.m. reporting a fight in the 900 block of Auburn Avenue. Officers were given information on scene that a man, later identified later as Andregg, had battered and assaulted a woman and was inside the home armed with a knife. After a warrant was obtained for Andregg’s arrest SWAT officers entered the home, but Andregg had left prior to their arrival.

The incident remains under investigation. Police are asking anyone with information on Andregg’s whereabouts to call dispatch at 505-334-6622 or SJC Crime Stoppers at 505-334-TIPS.

Farmington, N.M. –Farmington police are seeking information on the whereabouts of 44-year-old Waylon Johnson of Farmington. Johnson has an active warrant on charges of kidnapping, criminal sexual penetration and aggravated battery against a household member stemming from an incident that occurred early this morning.

Officers were dispatched for a report of fighting around 6:53 a.m. in the 1100 block of South Bowen Avenue. Officers arrived on scene and were given information that a man, later identified as Johnson, had kidnapped, battered and sexually assaulted a woman and that he was inside the home armed with a bat.  Negotiators attempted to contact Johnson by phone without success. After a warrant was obtained for Johnson’s arrest, SWAT and K9 officers entered to home, but Johnson had left the prior to their arrival.

The incident remains under investigation. Police are asking anyone with information on Johnson’s whereabouts to call dispatch at 505-334-6622 or SJC Crime Stoppers at 505-334-TIPS.